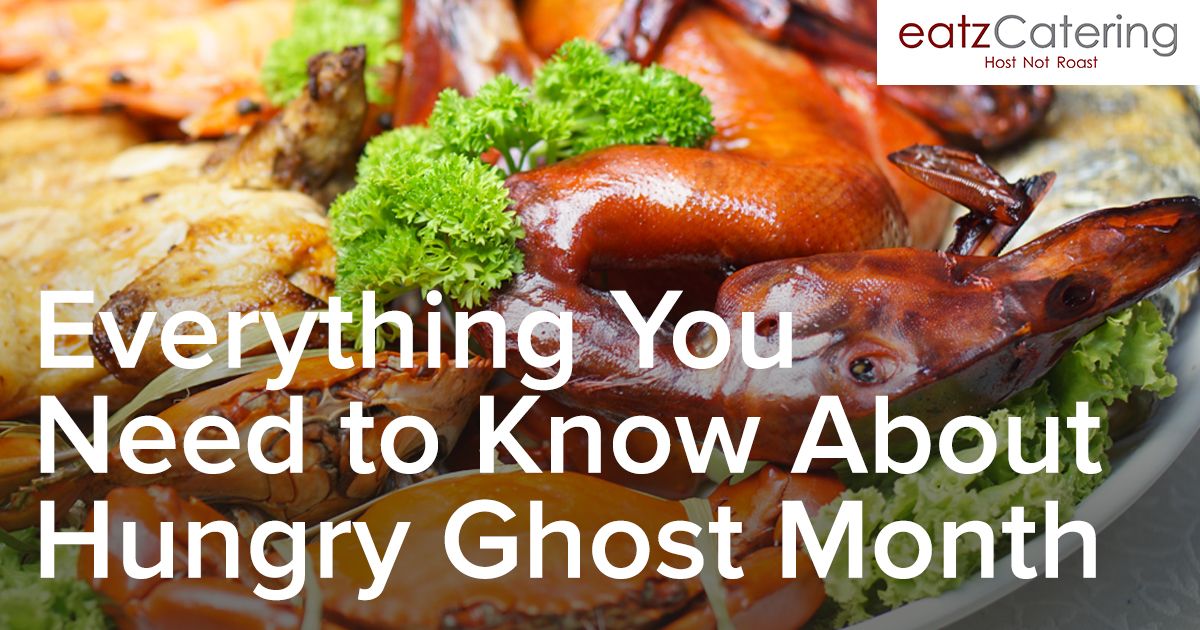 If you’ve never heard of or participated in Singapore’s Hungry Ghost Festival month, you’re in for a treat (literally!). Celebrated during the seventh month of the year (typically, from August 11 to September 9 with some annual variations in the dates), the Hungry Ghost Month is one of the most revered events of the year for the Chinese in Singapore.

Also known as Zhong Yuan Jie, the Hungry Ghost Festival is the time of the year during which ghosts starts roaming the Earth and some of them can get quite mischievous. This is why people make all kinds of offerings to them during the seventh month of the lunar calendar.

During the month, ghosts come back from the afterlife to feast. There are various ceremonies aimed at appeasing them. In a sense, the Hungry Ghost festival may seem reminiscent of the western Halloween but the event is much more sombre.

Various rituals are typical for the celebration.

For a start, people build fires to burn offerings to their ancestors. Paper money, clothes and various household items in the form of paper can be burned to make a symbolic offering and appease the ghosts. As long as these traditions are upheld, the ghosts will remain mild and harmless.

Food being left out in the open is another important part of the Hungry Ghost rituals.

Food offerings are diversified – from fruits to elaborate dishes. These can be left at altars or even on the side of the road to provide ghosts with a bit of nourishment.

Large tents are set up throughout Singapore. Chinese opera, live stage performances, stand-up comedy shows and dance numbers are typical while people are having festive dinners. Usually, everybody is welcomed at these events and can observe the special shows. If you come across a tent, just pop in to acquaint yourself with the Hungry Ghost month culture and traditions.

Remember though, at these live events, the first row of seats are reserved for the spirits themselves, so don’t go sitting at the wrong seats!

So, what exactly does it take to prepare for the Hungry Ghost Month festivities?

The Hungry Ghost fest itself takes place on the 15th day of the seventh lunar month (Around August). This is when the living and the supernatural world are considered to be closest to each other. Some of the biggest celebrations and most opulent rituals occur on this very day.

Hungry Ghost Festival consists of a family dinner and an outdoor ceremony for the delivery of gifts to those who have long passed.

The family dinner should feature an array of meals and dishes that the living can share with the dead.

This is one of the cases in which the focus does not fall that much on the symbolism of the food (as it usually does during festivities like those for the Chinese New Year).

The aim of the family dinner is to nourish the ancestors. Foods chosen for this occasion are usually simple and highly nutritious. Roast meats, vegetables and even dishes that departed loved ones enjoyed are all great choices for the seventh month festive dinner.

Once the food is prepared, the living share a meal inside while the nourishment for the ghosts is left out of the home, temple or the festive venue. Ghosts are never invited inside and for a good reason!

Very often, the temple spreads prepared for the Hungry Ghost Festival are exclusively vegetarian. Noodles and stir-fried vegetables are both common offerings for those who have passed. The vegetarian meals are prepared to respect Buddhist tradition but there are variations. Different families have their own traditions and meat dishes could also be prepared and left outside as an offering.

As already mentioned, symbolism isn’t the most important Hungry Ghost food preparation element but it still plays a role.

White is considered the colour of death while pink is the colour of luck. Thus, culinary arrangements for the festival often feature these two tones. Rice cakes that have been partially died in pink, for example, are a common treat.

These rice cakes are called peng kway. Apart from being symbolic, they’re also incredibly flavourful. The rice is stir-fried with peanuts, shallots, garlic and herbs.

As per the traditions, the food should be left outside for at least half an hour. This amount of time is sufficient for the ghosts to nourish themselves and continue minding their own business. In the end of the appeasement ceremony, many people will dig into the food that has been left and that’s undesired by the spirits.

There are many elements involved in the Hungry Ghost Festival preparations.

One thing you may want to do is prepare paper lanterns – these are needed to guide the wandering spirits. Usually, the paper lanterns are released on water on the 15th day and the ceremony is an important part of honouring those who have left our world.

Getting offerings for the spirits ready is also crucial.

Next, you should prepare your food offerings.

There are several ways to prepare the family dinner and the special offerings for the Hungry Ghost Festival.

High quality catering in Singapore is one of the best choices. You will get delicious, relevant meals for your celebration and you’ll also be left with a lot of time to handle the other rituals and the preparatory work that needs to be done.

Eatz Catering has special Seventh Month menus and sets you can choose among, depending on the size of the family gathering you anticipate to host. Don’t hesitate to acquaint yourself with the opportunities or to contact us in the event of questions.